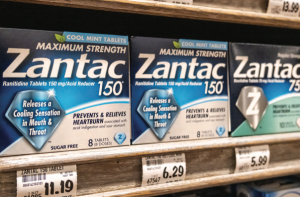 Zantac, a popular anti-heartburn medication, was once the world’s best-selling drug. Largely due to marketing strategies that emphasized the product’s safety, Zantac became the first drug to reach one billion dollars in sales, just five years after it was approved by the FDA. But on September 24, 2019, the FDA announced the first of many voluntary recalls of ranitidine products, such as Zantac. According to the findings of independent pharmacy Valisure, Zantac consumption results in an increased risk of developing numerous cancers due to the presence of an environmental contaminant, N-nitrosodimethylamine (NDMA). While the public did not know of the dangers of ranitidine products until 2019, the manufacturers of Zantac knew of these dangers since they put the drug on the market.

THE DANGERS OF ZANTAC

Ranitidine, the active ingredient in Zantac and other drugs that prevent heartburn, is a histimine H2-receptor antagonist that inhibits the production of stomach acid. According to various studies, ranitidine ingestion leads to an increased risk of developing cancer. Such studies have shown that ranitidine ingestion results in increased levels of N-nitrosodimethylamine (NDMA) in the human body, which has long been recognized as a highly carcinogenic compound. The World Health Organization (WHO) and the International Agency for Research on Cancer (IARC) define NDMA as “probably carcinogenic to humans.” Further, NDMA’s only commercial purpose in the United States is to induce tumors in animal studies, and it effectively causes cancer in almost every animal to which it is administered.

In the 1970s, Glaxo, (now Glaxo Smith Kline, or GSK Pharmaceuticals), designed the ranitidine molecule.
By 1983, Zantac was approved by the FDA, and was immediately extremely successful. After a few years of sales, GSK sky-rocketed from the twenty-fifth, to the second highest grossing pharmaceutical company in the country.

In 1993, GSK entered into a joint venture with Warner Lambert to manufacture over-the-counter Zantac. GSK’s U.S. patent on ranitidine expired in 1997, and generic forms of the drug entered the market. The following year, Warner Lambert and GSK split, and Warner Lambert retained control of the over-the-counter trademark in the United States. In 2000, Pfizer acquired Warner Lambert, and just a few years later, Boehrigner Ingelheim acquired the rights to over-the-counter Zantac from Pfizer. Meanwhile, GSK continued to manufacturer brand name prescription Zantac in the United States from 1997 to 2009. French drug manufacturer Sanofi acquired the Zantac trademark in 2017 and continued to sell Zantac in the United States until it was recalled in 2019. Each of these companies are named as defendants in various lawsuits across the country. From the time Zantac was put on the market, numerous studies have warned of ranitidine’s potential dangers; specifically, that it facilitates NDMA production and cancer development. For example: a 1983 study sought to determine whether or not ranitidine reacted with nitrite in gastric environments (such as the stomach) to produce nitrosamines capable of producing any significant harmful effects. Glaxo (GSK) supplied the ranitidine for the study. After administering ranitidine and nitrites for five days, scientists observed “DNA fragmentation” in many of the rats’ liver and mucus membrane of the stomach. DNA fragmentation is widely accepted in the scientific community as an initial step in developing cancer. Due to these concerning results, scientists warned that until they determine the effect ranitidine could have on humans, “it could be wise to adopt …. simple measures to hinder the possible nitrosation of ranitidine.” One such “simple measure” was to warn consumers that they should “not take [ranitidine] close to meals.”

Despite this information, GSK did not issue those, or any other warnings. Instead, over the years, the various manufacturers of Zantac encouraged customers to take Zantac simultaneous with or immediately following food. These companies aired hundreds of commercials depicting consumers eating the foods they love, experiencing heartburn, and taking Zantac for relief. Never once did any of these commercials warn consumers of the risk of developing cancer.

Over the next three decades, studies were continually published that warned of the dangers of ranitidine. In 2003, one such study suggested that “elevated levels of NDMA in drinking water produced by American wastewater treatment plants may be associated with the drug ranitidine.” In 2016, a study conducted by Stanford University found that after ingesting a single 150 mg tablet of Zantac, patients excreted over 47,700 nanograms of NDMA in twenty- four hours, on average.

The Valisure Petition further brought these issues to light. During routine testing of ranitidine products, the pharmacy detected “concerning levels of NDMA in ranitidine medications” and alerted the FDA in June of 2019. The FDA did not issue a warning or a recall. Due to the FDA’s failure to take action, Valisure filed a citizen’s petition to the FDA in September 2019, alleging that it found “extremely high levels of [NDMA] … in every lot tested, across multiple manufacturers and dosage forms of the drug ranitidine.” While the FDA and various defendants contend Valisure’s testing did not produce the most accurate measure of NDMA contained in each pill, the FDA issued a statement which conceded that the levels of NDMA present in Zantac are “unacceptable.”

Shortly after the Valisure petition was released to the public, many companies began recalling ranitidine products. Prior to this recall, none of the defendants even attempted to warn consumers about cancer risks or NDMA contamination associated with their product.

HOW THE PRESENCE OF NDMA OCCURS

There are two main theories as to how ranitidine causes NDMA exposure: (1) ranitidine’s inherent instability results in NDMA formation as the pill is exposed to heat; and (2) ranitidine combined with a high nitrite diet results in high of amounts of NDMA production.

The ranitidine molecule “contains both a nitrite and a dimethylamine (“DMA”) group which are well known to combine to form NDMA.” This is likely due to the inherent stability of the ranitidine molecule. Numerous studies suggest that in such warm environments, “ranitidine can react with itself to produce NDMA at levels well in excess of the permissible daily intake limit” of 96 nanograms per day. These studies also demonstrate that “NDMA [resulting from ranitidine’s instability] occurs in the conditions representative of those in the human body.” This evidence “builds a compelling case for ranitidine being a likely human carcinogen.”

It is also possible that ranitidine is breaking down into NDMA after exposure to heat and humidity outside the body, such as in shipping and storage conditions. Emery Pharma, an independent laboratory, found that after exposing ranitidine to heat over 70 degrees Celsius (158 degrees Fahrenheit) for just five days, the pill contained 142 nanograms of NDMA. This finding is significant, as is certainly possible for ranitidine to reach these temperatures during transportation from the manufacturer to the distributor, while in storage, or if left in a hot car after it has been purchased. Regarding these findings, The Trial Lawyer x 55 Emery CEO states that he is “worried that if [ranitidine] just sits at home at room temperature, it could gradually generate NDMA.” While these levels of NDMA are much lower than those reported in the Stanford study and Valisure petition, this is another plausible way by which ranitidine is causing NDMA exposure.

Numerous studies connect NDMA exposure to the formation of tumors in animals. One such well-designed animal study measured the dose response relationship of NDMA (and NDEA) consumption to the formation of liver and esophageal tumors. Other animal studies have found correlation between NDMA exposure and subjects developing tumors in the bladder, stomach, intestines, colon, kidney, lungs, and numerous other organs. Studies have NDMA is a highly absorbable toxin, and therefore can be absorbed into almost any organ it passes through.

There are very few epidemiological studies that observe NDMA’s effect on humans. NDMA is classified as a probable human carcinogen, therefore, it would be unethical to conduct a clinical study that knowingly administered NDMA to human test subjects. However, NDMA occurs naturally in certain foods, such as cured and salted meats, which have resulted in natural human consumption of small amounts of NDMA. As a result, various studies have been designed to measure the rates of colorectal, stomach, and liver cancer against the levels of dietary NDMA consumption. These studies reported a range of increased risks of developing various cancers when subjects consumed large amounts of NDMA. Specifically for stomach cancer, one study reported a doubling of the risk, and another reported up to a seven-fold increase in the risk. Additionally, a study that observed the effects of high dietary consumption of NDMA in nearly 10,000 Finnish men and woman found a doubling of the risk of developing colorectal cancer. A 2011 epidemiological study that observed NDMA dietary exposure in 3,268 cases reported “[d]ietary NDMA intake was significantly associated with increased cancer risk” for all types of cancer.

However, only a select group of cancers are being pursued in the litigation. Based on extensive research conducted alongside well-credentialed experts, the Science and Expert Committee submitted the five most viable cancer types which will be pursued in the Multi- District Litigation (MDL). Based on a combination of ranitidine-specific epidemiology, NDMA dietary studies, and occupational exposure studies, the five cancers that are most uniformly supported by the literature are bladder, esophageal, stomach, liver and pancreatic.

These cases will move forward in the litigation, and we anticipate a Daubert ruling from Judge Rosenberg in August of 2022.

CURRENT STATUS OF THE LITIGATION

In 2020, these cases were centralized in the Southern District of Florida in front of the Honorable Robin L. Rosenberg. Pursuant to Honorable Rosenberg’s order, four types of cases were consolidated into the multidistrict litigation: bodily injury cases, the consumer class action, third party payers, and medical monitoring. Bodily injury cases require plaintiffs to have a qualifying cancer diagnosis that is caused by Zantac in order to recover damages. The consumer class action does not require the plaintiffs to have been diagnosed with cancer, but rather seeks to reimburse plaintiffs for the cost of any adulterated drug (Zantac) that they would have not have purchased had they known it was adulterated. Similarly, third party payers, or health insurance companies, are seeking to recover money paid, pursuant to individual health insurance contracts with their clients, for each prescription of Zantac that the consumer would not have purchased had he known it was adulterated. Finally, medical monitoring cases seek to reimburse undiagnosed plaintiffs for necessary costs incurred by additional treatment and continued follow up with medical professionals to ensure they have not gotten cancer from Zantac.

Currently, expert depositions for both sides are being scheduled and will conclude by May 2022. Judge Rosenberg has outlined a preliminary Bellwether Pool, which will gradually narrow into the Initial Discovery pool after her Daubert ruling. We anticipate the first Bellwether trial to take place in July of 2023.

For decades, the manufacturers of Zantac and ranitidine silently exposed millions of people to a known carcinogen. Despite an abundance of information and numerous opportunities to warn the public of their dangerous product, the defendants in this litigation never attempted to make the drug safe, or tell public that it was dangerous. In a blatant disregard for public safety, defendants knowingly encouraged their customers to take Zantac in a way that promotes cancer development — making millions of dollars at the expense of millions of people.